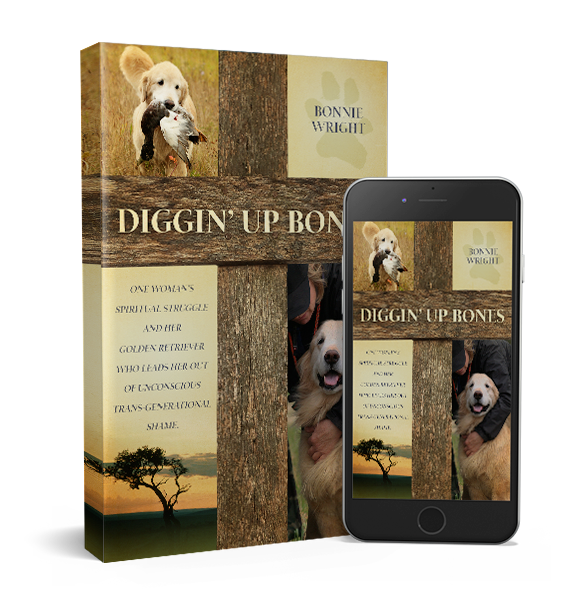 Diggin’ Up Bones is God’s unique story, using dogs to transform a life raised in chaos, anger, and where shame is an automatic assault. Feeding on the most innocent, ripping apart individuals and families one generation at a time. It’s time shame’s blanket is pulled back, breaking its hopeless demoralizing sting and rebuild lives that have joy and contentment. Freed from its twisted games.

This inspirational love story digs deep, challenging and uprooting the matters of a wounded soul and mind. It’s where truth and lies collide.

The younger of two siblings, Wright is raised on a central Wisconsin dairy farm in the 1950s. She lives isolated in a chaotic, contemptuous and dysfunctional environment traumatized by name calling, rejection, bullying, teasing, belittling, and flash anger. She is sexually molested, devalued and forced to carry out acts of violence against farm animals by her father who physically and verbally threatens her. Fearfully, sworn to silence, this is her normal life; take it, suck it up and shut up, or else. Her only true friend is the family farm dog. Her mother provides a foundation of faith.

Wary and constantly on edge, programmed, expecting to be at the center of a screaming match, Wright’s adult life is one anger-filled, chaotic, broken relationship after another. Not understanding why relationships are so dysfunctional, she feels targeted. Love is an abstract. Deep within her soul, she senses something is wrong and struggles to identify what has shackled her life.

More than fifty years later, entering her life, is Saxon, a Golden Retriever who shows her a spiritual pathway out of her emotional turmoil. The puppy turns dangerously aggressive at five months old. Through his own rehabilitation from inter-dog aggression, and the numerous threats of being euthanized, there is a desperate need to survive and protect one another as each depends on the other’s existence. This is a deeply passionate love story where Saxon and Wright form an unbreakable bond.

Saxon teaches her about matters of the heart. Because of God and Saxon, she discovers transgenerational shame is the root cause of the spiritual turmoil within. Saxon demonstrates to her that if he can rise above his anger, she can transcend shame’s stronghold and live a life of harmony and service. It’s a rough and tumble near-death spiritual struggle for both.

The humanness of dogs in this story will bring laughter and heartache as they carry out their predetermined roles toward Wrights awakening and soul healing.